For the most part, this room has had the same functionality ever since the time that the Roedde family lived in the house. Although a bathroom had been present when the family first moved in in 1893, the space could not be utilized for approximately ten years. This was due to the fact that the water line only ran as far as Nicola Street. Thus, the family still had to rely on wells, outhouses and chamber pot. And ever when the bathroom could be regularly used at last, all the family members had only that one washroom to share amongst themselves. During the boarding and rooming house period of Roedde House, additional bathrooms were installed downstairs. Nevertheless, the upper bathroom continued to be used even afterwards. When Roedde House became a public museum, it served as the staff’s restroom for a time before being converted into a sort of extension of the Collections Room.

In this part of the house, the observations that the restoration workers made could be categorized into four different areas: the entrance into the bathroom, the north wall elevation, the east wall elevation and the south wall elevation. As for the entrance, one substantial difference that should be noted is that there used to be a window above the door frame. This window was divided into two rows of five squares. Upon stepping into the bathroom, workers immediately noticed a coat hook on the left. Made from brass plated steel, the coat hook was mounted over cream coloured paint on the wall. In addition to the features aforementioned, another discovery that the restoration workers made concerned with the partition of the wall base on the right side of doorway. Under the south side of this partition, the restorers remarked that two pieces of linoleum came into contact with one another. Not only that, but the partition only bore finishing nails; no square nails were present in this structure.

In terms of the north wall, the findings that the restoration workers noted pertained predominantly to wall spreads.  For instance, in the northwest corner of the room, right behind the door, one could note that the west wall had been installed over brown paint, just as the towel racks had been over the south and east walls. In the same area, the restorers found a vertical patch over such a coat of brown paint. This vertical patch consisted of a hole from which pieces of wood protruded. More spread-related aspects were observed on the east side of the north wall. Among others, the workers found that underneath the window, a baseboard had been installed over white plaster. On top of all of these features, it is worthwhile to further mention that the north wall was the location for the cold water turn-off tap. The hot water turn-off tap, however, was situated in the pantry on the first floor.

Just like the north wall, the east wall exhibited many features concerning paint and plaster. As touched upon previously, a towel rack had been installed over a coat of brown paint. This towel rack was right next to the toilet. Next, the area behind the toilet was significant as well. Blocked by the tank, the area behind the appliance was composed of bare plaster. Yet another spot that caught the attention of the workers was that of the sink cabinet. For one, the wall panel immediately next to this appliance consisted of cheap mahogany that had been painted over. In fact, this wall panel covered a panel of a slightly smaller size that in turn was constituted by bare plaster. According to the workers, such bare plaster indicated an original installation of some other construction.

With regard to wall spreads and installations, the south wall was not short of noteworthy findings. As already expounded, the towel rack on this wall was, just like on the east wall, mounted over a coat of brown paint. Then, the marble backing of the sink had been painted in white. In the same spot, a 1 ¼” gap between the counter frame and the bottom of such marble had been applied over white plaster. Aside from these spread-related features, the south wall displayed aspects related to general installations. Firstly, workers found that a mirror had been put in over all the varied layers of paint and wallpaper. A few examples of such layers were red tempura paint, brown-tinted white paint and white-spotted silver paper with white, grey and blue vertical stripes. Above the mirror, a glass shelf had been applied over cream paint. Secondly, original construction of the plaster had been installed over plaster. Finally, on the east side of the south wall, a panel of cork had been applied onto bare plaster behind the bathtub. At the top of this cork panel was wooden trim that measured 3” high. To see the workers’ notes on the upper bathroom, see the file Bathroom-Upper I appended at the bottom of this page.

G19- Second-phase view of the east wall in the upper bathroom, specifically of what was formerly the toilet area. E2- Second-phase view of the north wall in the upper bathroom, specifically of the area immediately adjacent to the doorway. Here, workers had uncovered a vertical patch over a coat of light brown paint. This vertical patch consisted of a hole from which pieces of wood protruded. Below, one can also see the varied layers of paper and paint that had been applied onto the walls over the rooming and boarding house era of Roedde House. An example of this would be the green and yellow blotched wallpaper. E1- Second-phase view of the south wall in the upper bathroom. More specifically, the photograph shows a cork panel that had once been installed on plaster behind the bathtub. At the top of this cork panel was wooden trim that measured 3” high. E0- Second-phase view of the southwest corner in the upper bathroom; at the time that this picture was taken, workers had removed the sink cabinet. Here, one can see how the wall panel in this area consisted of inexpensive mahogany that had been painted over. Not only that, but this covered another panel, one of a slightly smaller size. Composed of bare plaster, this latter panel indicated an original installation of some other construction. C13- First-phase view of the window above the door of the upper bathroom. Workers later removed this window during the restoration project. C12- First-phase view of the east wall’s upper portion in the bathroom; the photograph was taken from the doorway that led one into the bathroom from the landing hall. Here, one can see some of the different layers of wallpaper and paint that the workers uncovered during the restoration project. 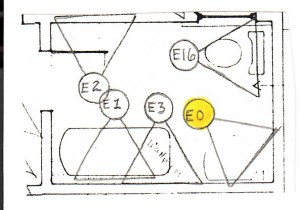 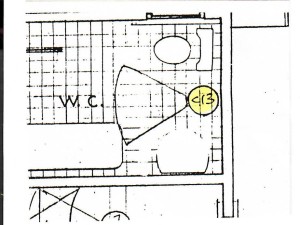 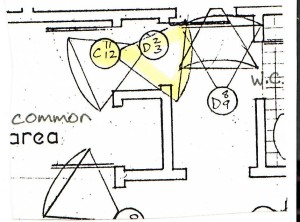