The northwest lean-to section of the house concerns mostly with the area that was once Gustav Roedde’s den. Prior to the restoration project in July 1987, the house overall served as a rooming house for years, and this space was actually a sunroom. Among other first observations of the room, workers found that boards ran up and down the walls. Spaced 13 ¾” apart and standing in between plate holder and floor mouldings, the boards themselves are 54” long and 2 5/8” across. Ceiling strips were found coated in high-gloss varnish and were butted by yet another strip that spanned over the top of the wall. Together, both the walls and ceiling of the sunroom were panelled with “Beaverboard.” However, in the case of the ceiling in particular, cedar shiplap was installed above the “Beaverboard” with round nails. Aside from the ceiling and walls, workers further made observations about the doors attached to the room. Among these, it was noted that the moulding around the door to the kitchen was the same moulding around the built-in cabinet under back stairs, as well as around the door on the east side of the kitchen.

Amidst these general aspects, there are many other details that are worthwhile to examine—specifically those concerning little objects that the restoration workers came across, and the woodwork of the room. As for the objects, workers first and foremost found miscellaneous articles behind a plate moulder holding that measured 61” in height, including a key, whistle, button and life saver wrapper. Then, a substantial amount of newspaper dated around the 1960’s was found between layers of wallpaper on the south wall. Lastly, workers uncovered an American penny, dated to 1930, behind the baseboard moulding, between the wall and fir flooring, and underneath the “Beaverboard” on the east side of the sunroom.

The workers’ remarks about the woodwork of the space are equally significant. For one, there were signs of 2 pieces of wood having been cut out of and then replaced on the south wall. 73” from the floor, the cut measured 15 ½” wide and 10 ½” long. After removing the “Beaverboard” on the far west corner of the south wall, workers noticed that the angled wood in place changed direction. Measuring 13 ¾” long and 5 1/8” wide, such wood resembled that on the roof. Moreover, the angled boards themselves were in deficient condition. Not only had rotting begun at the bottom of the wood, but one board in particular was poorly fitted as it was 36 ½” from the floor; this caused a gap 1” in width beside the corner post. Along with the wood cuts and the angled boards, the restoration workers also noted details concerning doors. For instance, door moulding was found split down the middle of the east wall. As well, workers predicted that the construction of a door had possibly started on the west side of the south wall Finally, what is further relevant about the woodwork of the sunroom is that some charring had been found on a stud near the top of the window on the west wall. See the appended diagrams for more details. 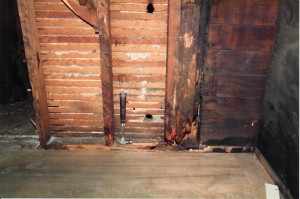 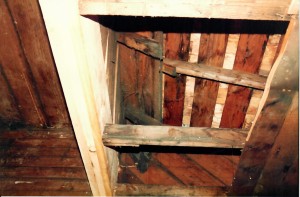 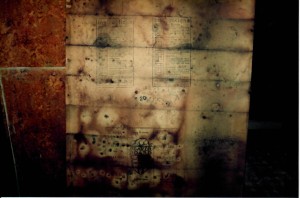 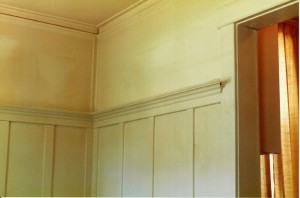 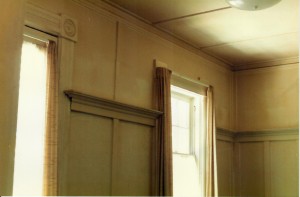 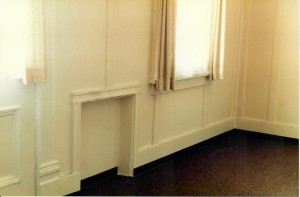 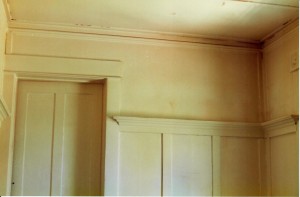 Den A-34 – First-phase view of the south wall in what used to be a sunroom.Restoration workers later converted this room back to the way Gustav Roedde’s den had once looked. 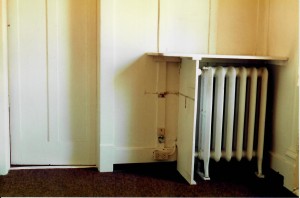 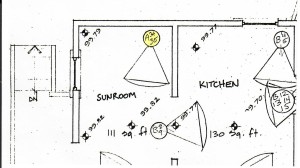 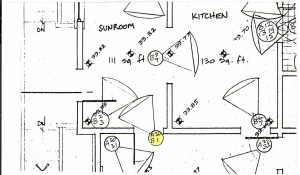 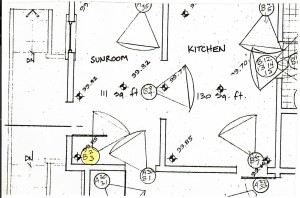 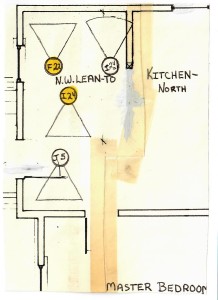 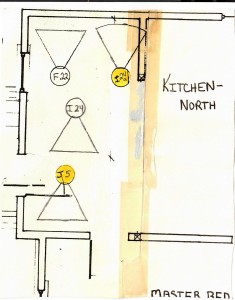