Right from the front entrance, it was clear that Roedde House was in need of mending. In terms of dimensions, it can be noted in the small foyer that the floorboards of the are 3’ 7/16”. Further, the height from the floor to ceiling is 120”. Immediately next to the front door, two stained glass windows also needed to be repaired. Drake O’ Brien, one of the restoration workers, tended to both of these. On the upper window, Brien replaced 2 blue pieces and 1 bronze, leaded a crack in 1 clear piece, reapplied putty onto them, as well as cleaned them. Then, he re-centered the panel in moulding. As for the lower window, Brien replaced 3 blue, 2 bronze, 1 red and 3 mauve pieces. Just like he had done in the upper window, in the lower window he leaded a crack in 1 clear piece, as well as reapplied putty onto it and cleaned it. Further into the foyer, along the wall by the staircase, the picture rail was mounted with round nails and right up against the plaster.

The West Wall of the foyer – that is, the wall with the sliding doors that lead into the parlor, had a fair share of repairs to be made. The workers made several notes upon examining this section of the house. For one, they noticed that albeit hard to read, numbers had been etched on the painted plaster by the corner moulding. A few inches above was a recess of sorts, for a square had been cut into the plaster and lathé; this square was not originally part of the house. In addition, on the immediate right of the doorframe, there was a 2” hole in the plaster and lathe. Workers predicted that a light switch must have once occupied this hole. Angling away from this small hollow space was a piece of green leaf patterned wallpaper. Another 2” hole was found in the plaster and lathé in the top left corner of the West Wall. Observations aside, the workers made two significant changes. Firstly, they removed the wallpaper. It is worthwhile to mention here that upon doing so, they found varnished drips both on the painted plaster and under the picture rail. Moreover, the workers applied green paint behind the corner moulding, but not behind the door moulding.

Entrance Hall B32 – A view of the staircase landing on the right, and a part of the West Wall on the left. The walls were later painted in turquoise green. The entrance into the dining room can be seen in the background, next to the West Wall. 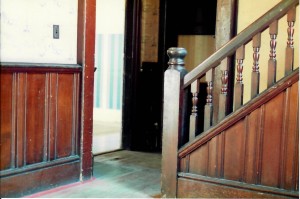 Entrance Hall B36 – Another close up of the original green paint. 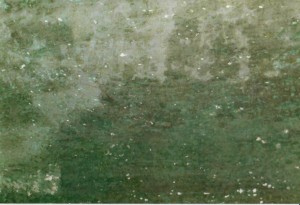 Entrance Hall B35 – A view of the landing on the staircase. 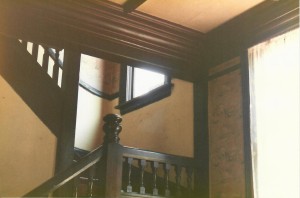 Entrance Hall P10 – A close up of the original green paint on the West Wall, revealed upon removing several layers of wallpaper. Paint of the same colour would later go behind the corner moulding. 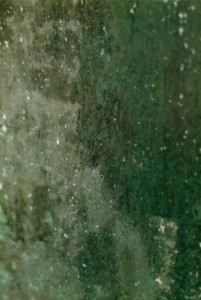 Entrance Hall B37 – A view of the sliding doors that lead into the parlour on the West Wall. 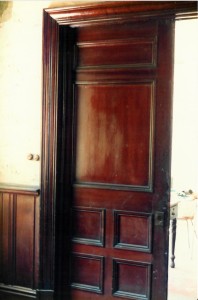 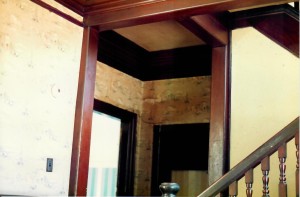 Entrance Hall E29 – When the wallpaper was removed on the West Wall, varnished drips were found under the picture rail, on the painted plaster. 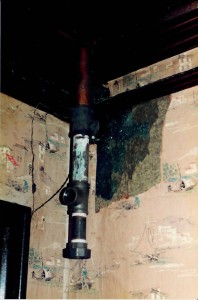 Entrance Hall B36 – A view of the coffered ceiling in the entry hall. The light fixture was later replaces with a cranberry hanging lamp that once belonged to Major Matthews, Vancouver’s first archivist. 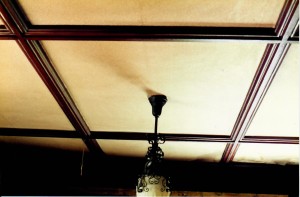 Entrance Hall B34 – A view of the staircase. 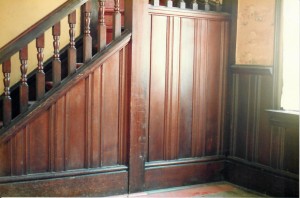 Entrance Hall O36 – East Wall of the foyer. Upon removing several layers of wallpaper, the restoration workers found that the walls were originally painted in green. Later, the entry hall would be repainted in this colour. 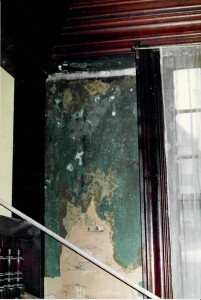