The modern working staff kitchen once served as a pantry for the Roedde family. Upon entering the rear door on the northeast side of the house, one could turn left and face the south wall of the pantry. The space described here is the sink area in the modern kitchen. At the time of the Restoration project in the 1980’s, workers remarked that a plumbing pipe must have been installed in the wall in the past, before the lathe had been put in. In addition to finding a glob of plaster stuck on the pipe, they measured the pipe holes to be 5” apart, 9” from the West wall, and 36 ½” from the floor. Below the traces of the plumbing pipe, workers found an outflow pipe of 1 ½” to have been located 13 ¼” from the West Wall and 17 ¾” from the floor.

On the corner of the south and west wall, close to the door that lead into the area of what is presently the heritage kitchen, the restorers came across a piece of wood nailed to the plaster with round nails. It should be noted here that there was neither any paint, nor wallpaper underneath the wood. The piece measured 66 3/16” from the floor. On the other side of the pantry, two holes were uncovered in the east wall, with one being above the doorway and one above the wainscoting. What is further significant to note about the east wall is that melted green crayon was found between the different layers of wallpaper, 4 ½” away from the wainscoting.

Many observations were particularly made about the shelves in the pantry. On the north wall, workers found a unit of shelves that in total bore a height of 54 ½”.   xOn average, each of the shelves on this wall measured around 11” deep and 82 ½” long. When measured from the top of the cupboard, the top shelf of each door is around 38” in height. The gap between the middle shelf and the cupboard top is 25”, and the gap between the lowest shelf and the cupboard, 14”. As for the width of the cupboard’s front boards, the west measured 4 ½”, the middle 3 ½” and the east 3 5/8”.

Another unit of shelves was located on the west wall, where the refrigerator currently stands in the modern staff kitchen. Here, restorers found that cupboards had been put on with square nails, while the doors were put on with round finishing nails. Interestingly, lying on such cupboards was a Canadian dime from 1911. In terms of its measurements, the cupboard bore wider doors; whilst the door on the left of the cupboard was 21 ½” wide, the door on the right was 15 7/8” wide. As for the shelves themselves, the top and middle shelves were approximately 11” deep and 51” long. On the other hand, the lower shelf was 10 ½” deep and 49 11/16” long. The gaps between each shelf range from around 10” to 15”. Unlike the cupboards on the north wall, the cupboard on the west wall bore no front boards; all boards were made with ¾” wood.

A number of similarities exist between the shelving units on the north and west wall. For one, the two in fact overlapped, with the north shelf covering a part of the west shelf. Both units bore moulding of the same width on top of the shelving. Moreover, the hinges on the two sets of cupboards were both situated 9” from the tops and bottoms of doors. Finally, behind each unit, wainscoting reached up to the middle shelf. With further regard to the wainscoting, the only substantial difference between the two units was that the cupboard on the west wall had wainscoting which had been varnished with shellac.

B22- First-phase view of the south wall in the pantry; here, one can see the outflow pipe that workers found against the wainscoting during the restoration project. The pipe measures 1 ½” across 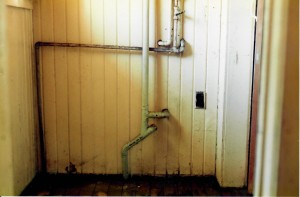 B23- First-phase view of the south wall in the pantry; here, one can see the plumbing pipe that workers came across during the restoration project. The pipe holes are 5” apart. Today, this is the sink area in the staff’s modern working kitchen. 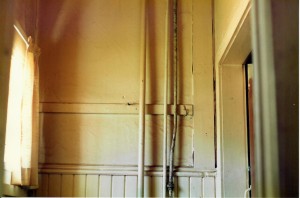 B24- First-phase lower view of the corner between the south and west walls in the pantry. 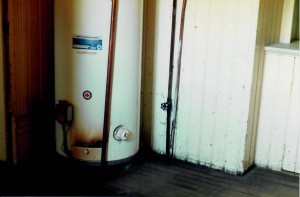 B25- First-phase upper view of the corner between the south and west walls in the pantry. 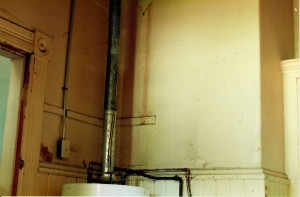 B26- First-phase lower view of the north wall in the pantry, specifically of the cupboard on the shelving unit. This part of the pantry was kept throughout the restoration project and was repainted in yellow. 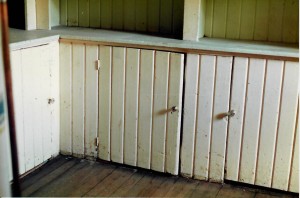 B27- First-phase upper view of the north wall in the pantry, specifically of the cabinet. For each of the four doors on the cabinet, the width ranges from 17 to 18”, and the length 36”. The unit overall bore a total height of 54 1/4”. 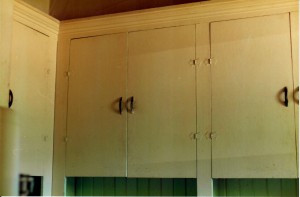 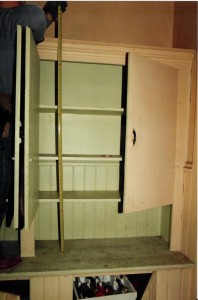 I21- Second-phase view of the north wall in the pantry, specifically of the area where the cupboards stood; here, one can see how the wainscoting behind the cupboards was varnished. 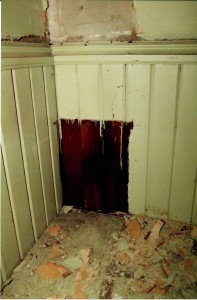 J3- Second-phase view of the north wall in the pantry, particularly of the area on the left of the doorway that would lead into the servant’s staircase; here, one can see the various layers of wallpaper that restoration workers removed. The yellow and red tile design was found underneath all of these different layers; this was the wallpaper design that had covered the walls of the kitchen at the time the Roedde family lived in the house. 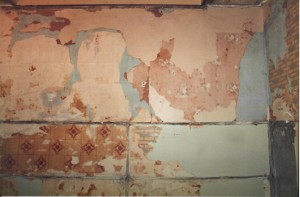 J20- Second-phase view of the north wall in the pantry; this is a close-up of the yellow and red tile design that was found underneath all the different layers of wallpaper that restoration workers removed. Such a design had covered the walls of the kitchen and pantry at the time the Roedde family lived in the house. 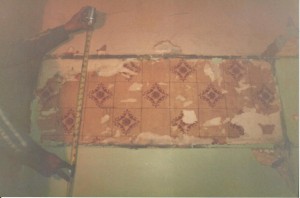 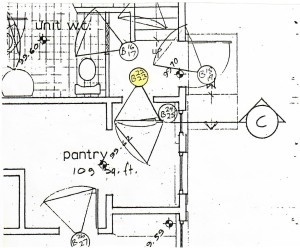 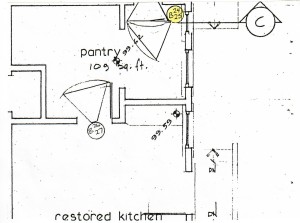 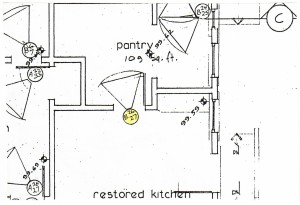 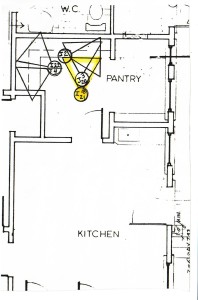 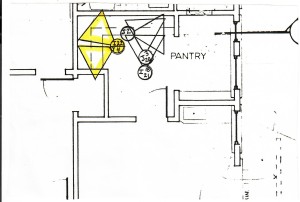 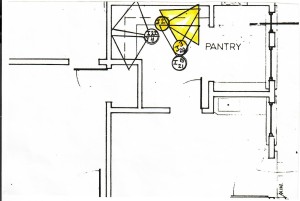 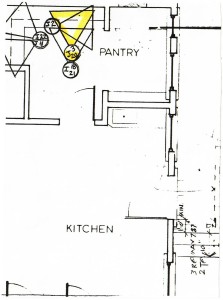