Stepping into the restored entrance hall in the 1980s’, workers then made a plethora of observations about the front stairs hall. As an installation from the rooming house era, a doorway used to exist in the north wall; this led one into the kitchen. Workers patched up the area to form a solid wall. Today, this spot is occupied by the grandfather clock. It is worthwhile to compare structural features between the upper and lower levels. Whilst a solid wall existed in the area of the upper bathroom upstairs, a closet doorway was situated immediately below it downstairs. Whilst there was no wall at the top of the stairs, there was one downstairs. Aside from the structural features between the upper and lower levels, one can note that there was a window above the landing on the east wall; restoration workers installed a new stained-glass window in this part of the house. Another significant aspect about the overall stairs area was that a cord was found under the stair rail moulding; it started at the doorframe on the right side of the upstairs landing hall, and extended until the kitchen wall downstairs. Also found under the stair rail moulding was a set of nail holes running down the aforementioned door frame.

Each of the walls were then examined individually. The north wall comprised of three components: the top section, which concerned the area behind the stair rail on the second floor, the middle section which stretched along the stairs, and the lower section, which was situated by the first-floor landing and bore the kitchen doorway touched upon earlier. In terms of the top section, workers remarked the upper moulding was darker in colour than the lower one. As for the middle section, the restorers made two particular observations. For one, a shaded area was found on the plaster. Painted brown, it ran up the stairs and around the landing. Above this area, the plaster was coated with dark green paint. In the lower section, right by the door that led into the kitchen, there were four layers of wallpaper underneath the moulding. Then, workers remarked that the plaster extended right down to the floor. Not only that, but they came across the base moulding, which had been previously installed with round nails. Lastly, on the immediate left of the doorway, a pencil line was found on a board that lined up with the wainscoting.

Like the north wall, the east wall is constituted by two smaller components. One component deals with the wall adjacent to the lower section of the north wall, and the other concerns the far wall which now bears an added stained-glass window. Among other observations, the restorers noted that the square nails had been holding the banister to the post. On the wall adjacent to the lower section of the north wall, workers found a coatrack that had been put on with round nails. Whilst the rack’s markings on the plaster measured 77” from the floor, the bottom of the rack itself measured 71 ¾” from the floor. Moreover, there was evidence of a second layer of plaster. Workers applied green wallpaper onto the area underneath the coatrack. In addition to this, the restorers came across another finding regarding the plaster in this part of the house. Upon removing the base moulding, they discovered that the plaster and lathe was 4 ½” deeper in than the plaster on the far wall. As for the far wall itself, workers also made wallpaper-related observations. Whilst the marbled brown, grey and cream pattern rests on the fourth layer of wallpaper along the rest of the stairway, the said pattern was, with the exception of a small patch of green paper, the only layers of wallpaper behind the banister.

Unlike the north and east walls, both the south and west wall each consist of singular surfaces. Albeit small in area, the south wall bore many traces of which the workers had taken notice. Firstly, the workers found a 2-hook coat rack 73 ¾” from the floor. Just like the one they found on the east wall, this coatrack had been installed with round nails and on top of green wallpaper. Underneath such paper, markings on the wall indicated that yet another coat rack had once hung in the area. These markings were 74 ¾” from the floor. In addition to the coatrack, workers also came across findings which pertained to the corner moulding. Indeed, right against the corner moulding, nail holes were found underneath the wallpaper previously mentioned. One hole was 55” from the floor, and the other 68”. There was, however, no trace of wallpaper behind the corner moulding itself; only paint was found. Whilst the corner moulding remained only in the stairs hall, it is worth noting here that the piece of wood ran up and along under the ceiling moulding. Beyond the coatrack and ceiling moulding, the workers paid further attention to a stove pipe hole. Covered by a metal plate, the pipe hole was measured to be 56” from the ceiling moulding. Although green paper extended underneath the plate, other layers of wallpaper covered the top of the plate. Ultimately, the hole was a trace left behind by those who had lived in Roedde house during its rooming house period.

But the south wall was not isolated in its case of bearing stove pipe holes. The west wall had a stove pipe hole as well. The wall being discussed here is the one which supports the doorway that leads one into the dining room from the entrance hall. Filled with plaster, the stove pipe hole measured 101 ½” from the floor and 4 ½” from the ceiling moulding. As for the plaster, the substance on the west wall was ¾” in width. For more details, see the notes Stairs and Stairs Hall XVI attached at the bottom of this page.

C3- View of the upstairs landing from the stairs. The marbled brown, grey, and cream pattern was the fourth layer of wallpaper found along most of the stairway. 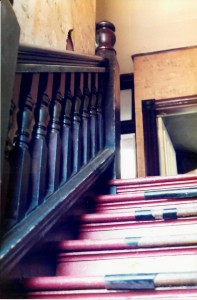 P12- View of the south wall in the stairs hall. Here, one can see the green paper that spread across the wall. 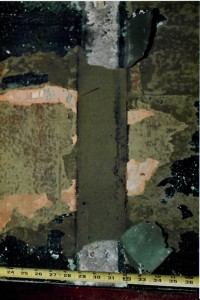 P13- View of the south wall in the stairs hall at the time of the restoration project, particularly of stove pipe hole that was found below the ceiling moulding. Covered by a metal plate, the hole measured 56” from the ceiling moulding. Whilst green paper was uncovered beneath the plate, other layers of wallpaper covered the top of the device. Ultimately, the hole was a trace left behind by those who had lived in Roedde house during its rooming house period. Aside from the stove pipe hole, one can take note of the corner moulding off to the side in the photograph. 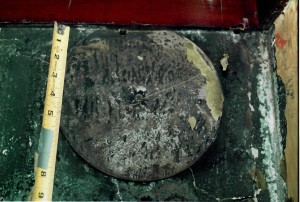 P14- View of the west wall in the stairs hall at the time of the restoration project, especially of the area on the left side of the doorway that led one into the dining room. 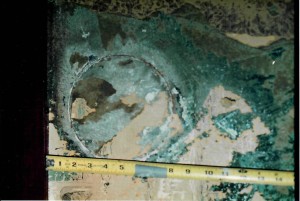 P15- View of the lower east wall in the stairs hall at the time of the restoration project, particularly of the coat rack that restoration workers ended up removing; the coatrack was left over from the time that Roedde House had served as a rooming house. 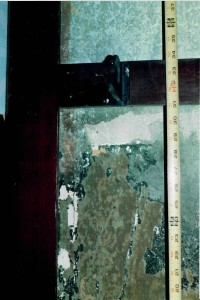 P16- View of the south wall in the stairs hall at the time of the restoration project. To the left, one can see the corner moulding. 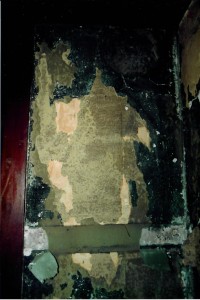 Q23- View of the far east wall in the stairs hall at the time of the restoration project. Here, one can see the coat of green paint underneath layers of wallpaper. Among these layers are a marbled brown, grey and cream pattern at the top, and green paper at the bottom. This was most likely the colour of the walls at the time that the Roedde family lived in the house. Thus, through the restoration project, the walls would be repainted in the same colour. 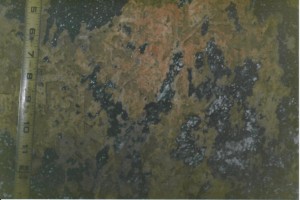 Q24- Close-up of the far east wall in the stairs hall during the restoration project, particularly of the area close to the ceiling. Here, one can see the original coat of green paint that lied underneath layers of wallpaper, among which included a marbled brown, grey and cream pattern at the top and green paper at the bottom. Workers would thus repaint the walls in the same colour later 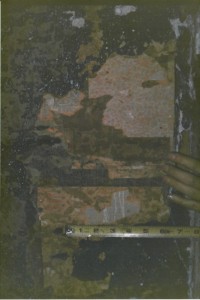 Q25- Close-up of the far east wall in the stairs hall during the restoration project, particularly of the area close to the window. 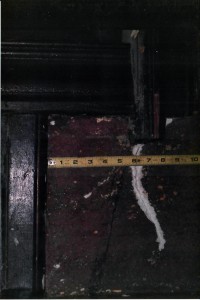 S10- View of the far east wall from the upstairs landing, particularly of the area close to the ceiling. 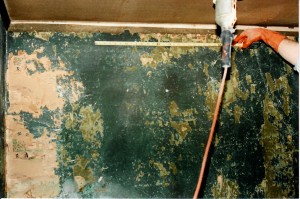 S11- Close-up on the layers of wallpaper that were removed by workers on the far east wall of the stairs hall. Underneath the layers, the workers found that the walls had originally painted in green. Later, the restorers would repaint the walls in the same colour. 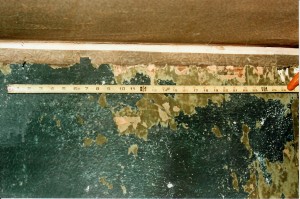 U16- View of the north wall’s middle section in the stairs hall, particularly of the banister. 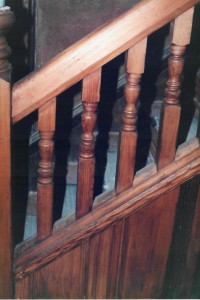 U21- View of the west wall in the stairs hall, particularly of the wainscoting on the left of the doorway that would lead one into the dining room. 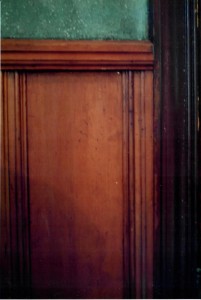 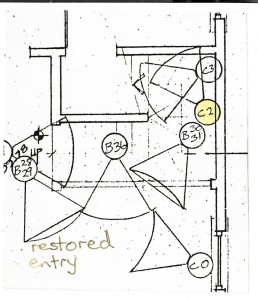 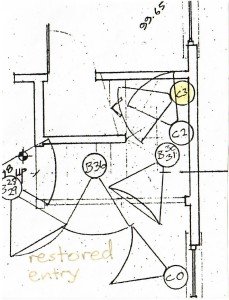 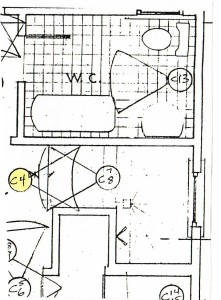 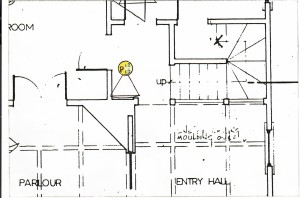 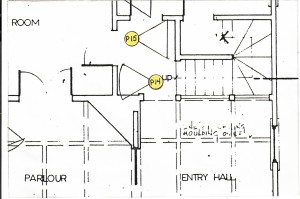 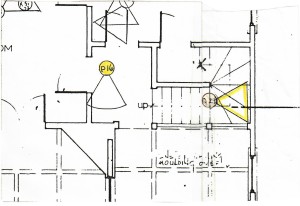 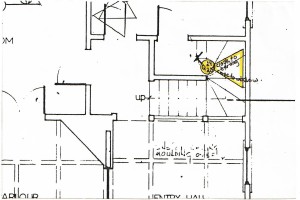 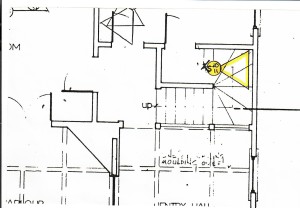 Stairs Stair Hallway Layout U16 U21 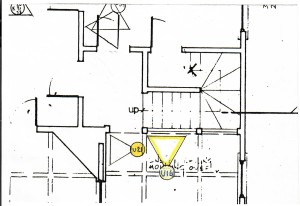